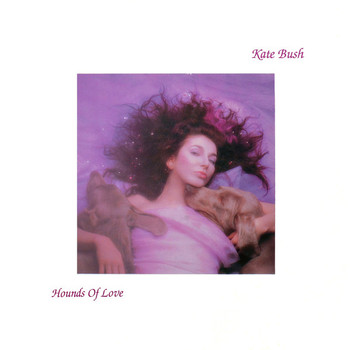 "Tell me, we both matter, don't we?"
Advertisement:

Following the release of the highly experimental The Dreaming, EMI urged Bush to go for a more commercial sound with her next release as well as taking less time to make it. Ignoring both of these commands, Bush built a studio in the backyard of her house and recorded demos there throughout 1983 up to the start of 1984, spending the next year and a half fleshing them out with session musicians and the Fairlight that played a major role in the making of her previous record. The result was a middle ground between The Dreaming's percussive avant-pop and the Baroque Pop of her earlier work.

The record is unique in the way it is presented. Side one (tracks one through five on CD) is labeled "Hounds of Love" and acts as an anthology of unrelated vignettes, ranging from stories of personal introspection to childhood memories to biographical tales. Side two (tracks six through twelve), labeled "The Ninth Wave," is a hazy, nightmarish tale of a woman lost at sea after a shipwreck. Over the course of the story, set across a single night, she is visited by the ghosts of her past, present, and future selves while nearly freezing to death, ultimately regaining the will to live and being rescued as the sun rises. Bush would feature a similar model on Aerial two decades later, with that one being split across two discs rather than two sides.

Hounds of Love was the album that broke Bush from underground cult favorite to commercial smash in the United States, giving her her only top 40 hit there ("Running Up That Hill", which peaked at No. 30 on the Billboard Hot 100). It also brought her back into the mainstream in her native UK, all four singles reaching the top 40. The album itself was also a major success, topping the charts in the UK and the Netherlands and peaking at No. 30 on the Billboard 200, going on to become the 14th highest-selling album of 1985 in the UK. The album was later certified double-platinum in the UK, platinum in Canada and Germany, and gold in France and the Netherlands.

This would be her last regular studio album released in America under EMI America Records, after which Bush would depart for Columbia Records stateside. Her final release with the label was her Greatest Hits Album, The Whole Story, in 1986.

"'Cause every time it tropes, you're here in my head"