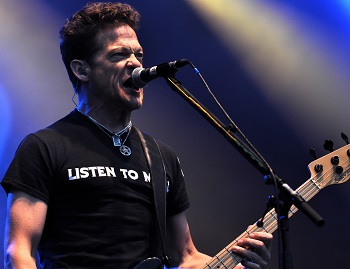 Jason Curtis Newsted is an American singer/bass-player most famous for his 14-year tenure in Metallica, along with his work in Flotsam and Jetsam, Voivod, Echobrain, and short-lived tenure in Ozzy Osbourne's band. Newsted started his professional career in Flotsam and Jetsam, playing on their album Doomsday for the Deceiver. He went to join Metallica, replacing Cliff Burton of the classic line-up after auditioning and beating out 39 other players. He would go on to play with them as a part of their Long Runner Lineup, but would spend all his time in the band as the "Newkid," having never enjoyed the songwriting influence of the others, with his efforts to play in side projects constantly being shot down by James Hetfield. Newsted suffered through endless hazing by the other members and was only given three writing credits on four albums ("Blackened," "My Friend of Misery" and "Where the Wild Things Are").

In 2001, he attempted to convince the band to go on hiatus and let him focus his attention on Echobrain, which was refused by the band, and according to him, Hetfield had demanded that promotion for the band be dropped by Metallica's management for fear of the project affecting Metallica. He finally had enough of the abuse and quit, kicking off the chain reaction that nearly destroyed the band.

His only stated reason for leaving was that he'd sustained a neck injury from headbanging, though it's believed he made more of this than there really was in order to avoid airing his grievances in public. He appeared on That Metal Show in 2013, where he talked again about his surgeries and rehab, and also shed some light on the controversy over the bass on Justice.

After his departure from Metallica, he would bounce between multiple projects, ironically including his replacement of Rob Trujillo in the Ozzy Osbourne band. He would record two albums with Voivod, participate in Rock Star Supernova, sustain a shoulder injury then begin a career in art while recovering, and play in WhoCares, a charity Super Group built by Tony Iommi and Ian Gillan.

In 2012, he since formed his own band simply called Newsted, featuring himself on bass and lead vocals, Jesus Mendez Jr. on drums, along with Jesse Farnsworth and Staind guitarist Mike Mushok on guitars. Their debut E.P called Metal was released in January 2013, and debut album called Heavy Metal Music released in August 2013, breaking into the #40th spot on the Billboard 200. They would release several videos, including King of the Underdogs

and ...As The Crow Flies

. The band has played on Megadeth's Gigantour 2013 note Proving how hard it is for him to catch a break, however, he couldn't participate in the Canadian leg due to catching pneumonia. Unfortunately, according to Mushok, Newsted shut the band down in early 2014.

In an interview with Eddie Trunk

on August 29th 2016, Jason explains what happened to his band and why he went off the grid for two years afterwards. Basically, he got screwed over by an incompetent concert promoter/bookernote the notorious Australian promoter AJ Maddah

, and very shortly thereafter, his mother got sick, causing him to shut his band down and focus his efforts on taking care of her.

Newsted and his music provide examples of the following: