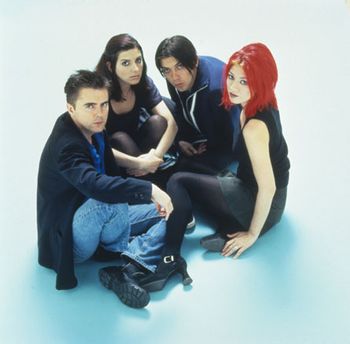 Lush are a British Alternative Rock band, originally active from 1987 to 1996 and reunited in 2015. They were, along with My Bloody Valentine, Ride and Slowdive, one of the main examples of Shoegazing, a genre from the early 1990s thus named because of its druggy Psychedelic Rock music and the relatively static live performances.

The band was formed in 1987 and initially called itself The Baby Machines; its members were Meriel Barham (vocals), Emma Anderson (guitar), Miki Berenyi (guitar), Steve Rippon (bass), and Chris Acland (drums). The following year Barham left the band, Berenyi and Anderson took over as lead vocalists, and the band was renamed Lush. In 1989 Lush signed to famous alternative talent incubators 4AD Records (see Cocteau Twins, Dead Can Dance, The Breeders, The Pixies, etc.), released Scar, a 6-track mini-album, and put together a live show that proved extremely popular.

Lush further raised its profile with additional EPs, extensive touring during the years 1990-91 (when it acquired the "shoegazing" label), performing among other places at the Glastonbury festival and going to Japan and the USA. In 1992 it released its first full-length album, Spooky, produced by Robin Guthrie of the Cocteau Twins, resulting in a sound fairly similar to that of the latter band—namely walls of sound, ethereal vocals and plenty of guitar effects. Just before the release of the album Rippon left the band and was replaced by Phil King.

Lush played at Lollapalooza in 1992, and released two more albums in the following years, Split, which featured a more stripped-down sound than Spooky but otherwise continued with the trippy shoegazing, and the upbeat Lovelife, which surfed on the mid-1990s Britpop craze to great success in the UK. However the attempted breakthrough on the American rock scene was unsuccessful, and the band broke with their management after the cancellation of tours in the UK and Japan. In 1996 Acland committed suicide and Lush went into hiatus, eventually disbanding in 1998.

The band reunited in September 2015 with Elastica drummer Justin Welch filling in for the late Acland. In 2016 Lush released a new album Blind Spot featuring 4 songs. Phillip King left Lush in the middle of what would become their last tour, before the group permanently dissolved. Bassist Michael Conroy of Modern English replaced King for their final concert.

In September 2018 a successor to Lush was formed. Piroshka is a quartet consisting of Berenyi, Welch, Conroy and former Moose member K.J. "Moose" McKillop (who is also currently in a relationship with Berenyi, with two children between them). Their debut album Brickbat was released in February 15, 2019.

A piece of trivia: Miki Berenyi is half-Japanese, half-Hungarian, and her mother, Yasuko Nagazumi, played minor roles in You Only Live Twice and Space: 1999.