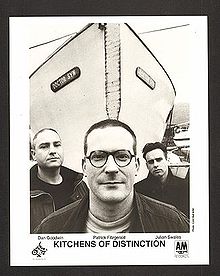 Kitchens of Distinction (usually shortened to KOD) are a British Dream Pop/Shoegazing band active from 1986–96, and from 2012 on. The band consists of Patrick Fitzgerald, Julian Swales, and Dan Goodwin, making them one of the few Shoegazing acts that is just a trio.

The band started in 1986 when the three met at college. They got their name from a local kitchen store in their town. They signed to a few Indie labels before they got their feet on the ground with their first few singles and first album. Of these few original singles they released, many publications have listed 1988's "Prize" and 1989's "The 3rd Time We Opened the Capsule" on some "Greatest Songs" lists.

In 1989, they released their first album, Love Is Hell to critical acclaim, but to poor commercial performance due to the band's refusal to sell out. Their second album, Strange Free World got lukewarm critical response, but became a fan favorite. Then in 1992 their masterpiece, The Death Of Cool was released and they reached their artistic peak. The band stood out from their fellow Shoegazing peers by having their vocals a lot higher in the mix, allowing for Fitzgerald's witty and sardonic lyrics to shine through.

Facing personal problems and financial troubles, the band dissolved in 1996 and became something of a footnote in Rock history. These guys are probably one of the most influential bands a lot of people have never heard of. Dream Pop and Shoegazing bands of the 2000s found themselves really heavily influenced by these guys. Interpol, Slowdive, and The Decemberists are just a few of the bands that were influenced by them. Their unique focus on lyrics/vocals blending more smoothly with the layered guitars helped them stick out a little more from their fellow shoegazers.