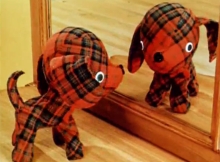 Piesek w kratkę (Checkered Dog) is a Polish Stop Motion children's series, with six episodes produced in 1968-1972. The protagonist is a felt dog toy, who has fun and adventures in his owner's room and around the house.