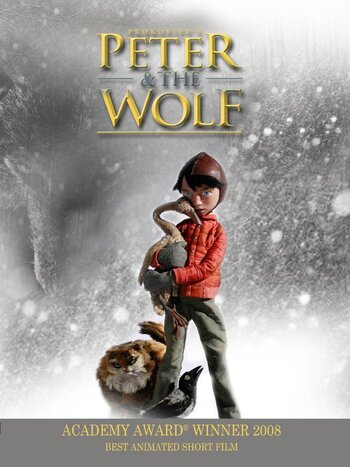 Peter & the Wolf is a 2006 animated short film (33 minutes) directed by Suzie Templeton.

It is, of course, an adaptation of Sergei Prokofiev's musical children's story, Peter and the Wolf. It takes some liberties with Prokofiev's plot, but the story still centers around a boy named Peter who lives with his grandfather in a cabin in the forest. Peter wants to go out and play with his two pets, a duck and a crow with a lame wing. Peter goes into town for some groceries and gets a balloon, which he uses to help the crippled crow to fly.

The cabin is protected by high walls, and Grandfather locks Peter in, apparently because Grandfather is afraid of wolves that live in the forest. However, Peter manages to filch the keys while Grandfather is sleeping, and sneaks out of the compound with Duck and Crow. The three of them have a grand time sliding around and playing on the frozen pond just outside the gate—until a wolf does in fact show up.