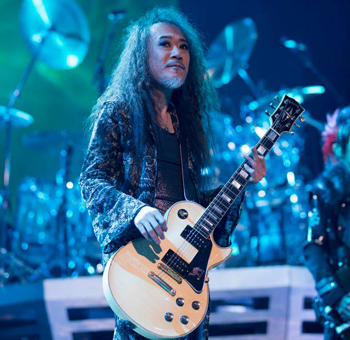 Pata playing with X Japan at Madison Square Garden, 2014
Tomoaki Ishizuka (born November 4, 1965), best known by his stage name of "Pata" (either chosen by himself or bestowed upon him by other bandmates because of how he reminded them of the main character in Patalliro! ) is a Japanese rock guitarist best known for being the second guitarist of the band X Japan. Before his days with X Japan, he had his own band, "Judy" which he had asked Yoshiki to join, an offer which was turned down. Later, when one of X's guitarists took ill, Yoshiki asked Pata to join X Japan, he accepted, and the band's most recognizable lineup was in place.
Advertisement:

Pata began a solo career in 1993, with the Pata's Bootleg concert and self-titled album "Pata." When X Japan lead guitarist hide began his solo career, Pata often played as one of his supporting guitarists as a member of Spread Beaver. He also played support for other bands and artists and toured with hide up until 1996.

After hide's death, he organized an alternative-rock band called Dope Headz with X Japan bassist Heath, and he continued to play with Heath in Dope Headz until the dissolution of the band. He also recorded with Miyavi on Miyavi's album Galyuu, as second guitar. He would go on to form his current band, Ra:IN (members Pata [g], Michiaki [b], Tetsu [d], D.I.E. [keyboards, programming, vocals]

Pata, along with Dynamite Tommy and Taiji Sawada and others, also appeared in the Japanese rock film "Attitude."

Currently, as of February 2016, he is recovering from alcohol-induced liver and gastrointestinal damage which led to portal thrombosis and damage to his large intestine, which has led to a hiatus for X Japan and doubts about the future...