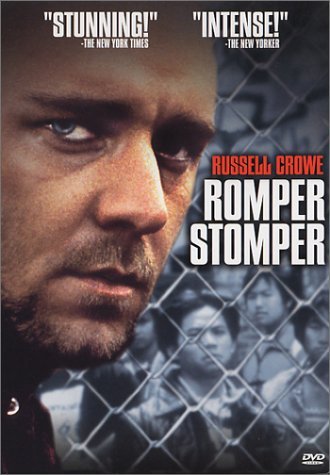 A 1992 film written and directed by Geoffrey Wright, Romper Stomper is an interesting look at the Neo-Nazi skinhead culture of Australia.

Hando (Russell Crowe) and Davey (Daniel Pollock) are best friends, having a great time hanging with their Neo-Nazi pals and beating up on members of the local Vietnamese population. Things go awry when they meet Gabrielle (Jacqueline McKenzie), a junkie with a dark past. The woman drives a wedge between the two men that is only deepened when their gang dissolves, leading to a final confrontation.

A sequel series of the same name aired in 2018 on Stan, with Dan Wyllie, Jacqueline McKenzie and John Brumpton reprising their roles.

Not to be confused with Romper Room.