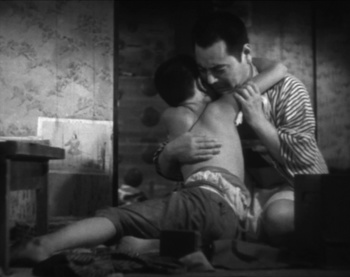 Passing Fancy is a 1933 film directed by Yasujiro Ozu.

Kihachi is an illiterate laborer, a single father who lives in Tokyo with his 8-year-old son, Tomio. Kihachi works at a brewery along with his buddy, Jiro. One day while leaving a dramatic reading they run into a pretty young woman named Harue. Harue apparently is homeless (no explanation why), and Kihachi, who is instantly smitten, decides to help her. He gets her a place to stay with Otome, his friend who owns the local bar.

Otome soon begins to act maternally towards her young guest. Meanwhile, Kihachi makes romantic overtures to Harue, but is disappointed to find out that she prefers taller, handsomer Jiro. That plot thread is short-circuited however when Kihachi gets some bad news about his son.