Film / A Story of Floating Weeds 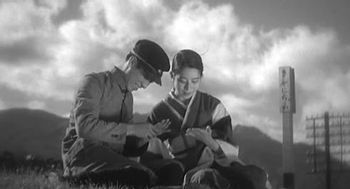 A Story of Floating Weeds is a Japanese film from 1934 directed by Yasujiro Ozu.

Kihachi is the leader of a traveling troupe of kabuki actors. The troupe stops in a small town somewhere, a place they have been before, as the players are recognized as they get off the train. Kihachi hopes to stay for a year. The main reason he hopes to stay for a year is the presence of Otsune, an innkeeper who is the mother of Kihachi's son, Shinkichi. They have kept this a secret from Shinkichi, who believes his father is long dead.

Torrential rains put a crimp in the troupe's schedule and leave them stuck in the little town. Meanwhile, Kihachi's lover Otaka, an actress in the troupe, observes him with Otsune and figures out what's going on. When a confrontation ends with Kihachi striking Otaka and kicking her out of the troupe, Otaka enlists another actress, Otoki, to seduce Shinkichi.

A Story of Floating Weeds is a silent film — silent film hung on in Asia for a few years after it had been abandoned in the United States and Europe. Ozu remade this film a quarter-century later in color and with sound as Floating Weeds, to international acclaim.