Film / Don't Cry, It's Only Thunder 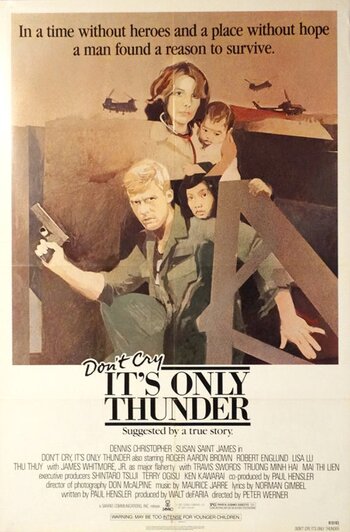 Based on a True Story and set during The Vietnam War, the film centers upon a young and somewhat unscrupulous U.S. Army medic named Brian Anderson (Christopher), who makes extra money on the side dealing drugs. His life is forever changed when he meets an Army doctor named Katherine Cross (Saint James), who persuades him to help her save a group of war orphans. First, she appeals to his sense of guilt; then she blackmails him into assisting. The children are cared for by a few Vietnamese nuns. The doctor and the medic bring them badly needed food and supplies. To do this, they must face enemy bombs and the resistance of the U.S. government.

Did we mention that Sanrio note  Yes that Sanrio (via "Sanrio Communications") was behind the production of this movie?

Don't Cry, It's Only Thunder contains examples of: