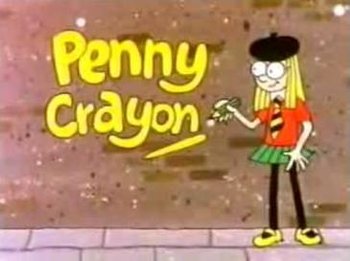 "Penny Crayon! Can draw anything she likes,
Like cats and dogs and crocodiles, And juggernauts and bikes,
But Penny’s magic drawings are not like any other,
They walk and talk, and come to life, creating lots of bother!"
— The first verse of the Expository Theme Tune
Advertisement:

Penny Crayon was a British cartoon that ran from 1989 to 1990, about the adventures of a schoolgirl (voiced by Su Pollard) who has a set of magic crayons. Whatever she draws comes to life, in a manner similar to Simon In The Land Of Chalk Drawings. Penny and her friend Dennis have adventures, get into scrapes, and use her powers to foil bullies and bank robbers alike.