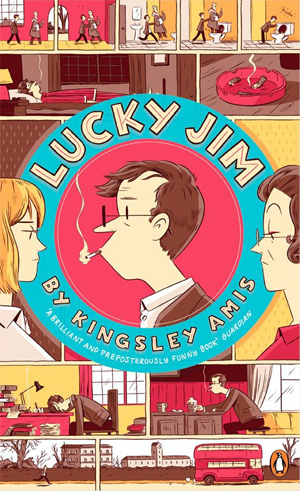 Lucky Jim is a novel by Kingsley Amis, first published in 1954. A satire of post-war academic life in the UK, the story documents the woes of Jim Dixon (based on Kingsley's friend, the poet Philip Larkin), a reluctant first-year lecturer at an unnamed regional English college.
Advertisement:

Jim must struggle to keep his job and impress his advisor Professor Welch, all the while navigating his own personal problems. These include: an on-again, off-again relationship with his suicidal colleague Margaret, a series of dull arty events Welch forces upon him, his upcoming keynote lecture on "Merrie Old England", and a romantic rivalry with Welch's pretentious artist son Bertrand. Not to mention the fact that Jim utterly loathes his subject of study, Medieval History.

The book has been a subject of several film and TV adaptations, most recently in 2003. Time Magazine included the novel in its “TIME 100 Best English-language Novels from 1923 to 2005” list.