Film / This Land Is Mine 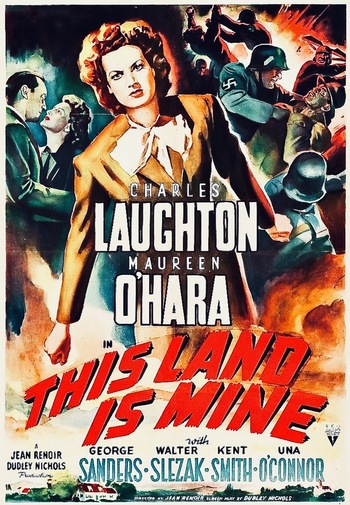 You'd never guess that Charles Laughton is the star.
Advertisement:

This Land Is Mine is a 1943 World War II drama film directed by Jean Renoir.

The setting is a small village somewhere in Nazi-occupied Europe. Albert Lory (Charles Laughton) is a meek schoolteacher who lives with his domineering mother Emma (Una O'Connor). Albert is secretly in love with a significantly younger teacher, Louise (Maureen O'Hara), but he is too meek to tell her. Louise, meanwhile, is engaged to George (George Sanders), who owns the local railroad station.

The film opens with the Germans arriving. George and Mayor Manville (Thurston Hall) both advocate collaboration with the occupiers. Major Erich von Keller (Walter Slezak), the German commander, turns out to be a fairly pragmatic Nazi, writing off obvious sabotage at the railyard as an accident, because he doesn't want to start the usual cycle of executions and reprisals. George supports the German plan for Europe, but his fiancee Louise hates the Nazis. Albert, for his part, is just keeping his head down.

It becomes harder to keep one's head down when the local resistance throws a bomb at a German parade through town, killing two soldiers. Major von Keller takes off the kid gloves and seizes ten hostages, notifying the town that he will execute them all if the bomber doesn't come forward. Albert is having dinner at Louise's house when he finds out who the bomber is—Louise's brother, Paul (Kent Smith).

Part of Jean Renoir's wartime stay in Hollywood, where he'd come to work after the fall of France.