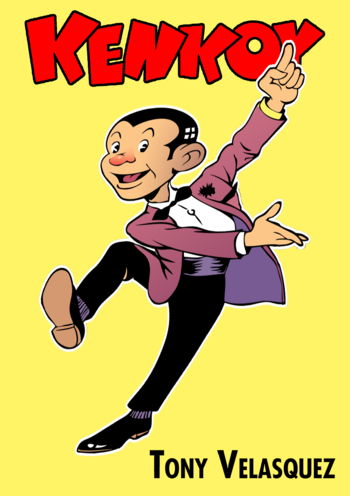 Kenkoy was the first newspaper comic strip to achieve mass popularity in the Philippines. First conceived in December 1928 but debuting in January 1929 in the Tagalog-language Liwayway magazine, it shot its hardworking creator Tony Velasquez to fame and fortune over the next several decades that he wrote, illustrated, and built up the world of Kenkoy strips. Both creator and character became so wildly popular and well-loved in Filipino mass pop culture; the Kenkoy strips were eventually translated into at least four other Philippine languages for regional publications, the franchise was adapted for film several times and even optioned, though so far unsuccessfully, for animation, and today the very term "Kenkoy" is now a synonym for "goofing off" or "silliness".

When it came out in the late 1920s it poked fun at the rapid wave of cultural Americanisation sweeping the Philippines, then a U.S. colony following its occupation in the Philippine-American War (1899-1902, but with sporadic conflicts as late as 1910 or beyond). No one in the strip personified this more than Kenkoy himself, spouting mangled Americanisms and going out dressed to the nines in American style, in defiance of the heat and humidity, with his tailored suits, wide-brimmed hats, stylish ties and slicked-back hair—so glossy it was iconically drawn with a permanent four-panel window reflection regardless of where Kenkoy was, even outdoors. He really dressed to impress, especially when wooing girls or in particular his sweet and demure girlfriend, Rosing.

Supporting characters, some of whom eventually got their own Spin Offs, included: Kenkoy's parents Tatang Teroy and Aling Matsay, the abovementioned Rosing, his rival Tirso, and many more; later on Kenkoy even got a family with several children. Velasquez continued drawing and writing Kenkoy stories as well as other connected comic stories and characters, for an astounding half-century, well into The '80s, and although since his death his characters haven't been resurrected with new stories today, Kenkoy and his whole barangay (neighbourhood) of characters continue to hold a place in Pinoy pop culture and public consciousness even today, nearly a century after he first stepped out in his Amerikana suits and oiled hair.