Manga / This Art Club Has a Problem! 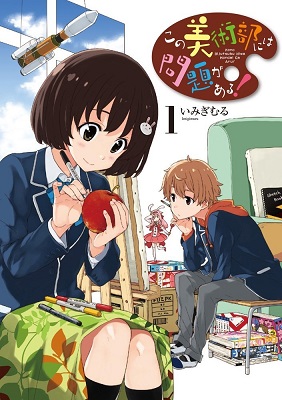 There's something wrong with this Art Club!
Advertisement:

Mizuki Usami has a problem with the Art Club: the club president is a slacker, their newly-recruited kouhai hardly shows up, and the only other person who takes his work (somewhat) seriously, Subaru Uchimaki, is more concerned about painting the 'Ultimate 2-D Bride' than doing any 'proper' work! Will this Art Club ever get their affairs in order?

This Art Club Has a Problem! (Kono Bijutsubu Niwa Mondai ga Aru! or Kono Bijutsubu ni wa Mondai ga Aru!; Japanese: この美術部には問題がある) was originally a two-shot Slice of Life manga by Imigi Muru, and was subsequently serialized in Dengenki Maoh. It began running in 2012 and, as of September 2020, has twelve volumes. An anime adaptation premiered in July 2016, which can be watched on Crunchyroll; an English-language Blu-Ray was released in 2019.

This Series Has Tropes!