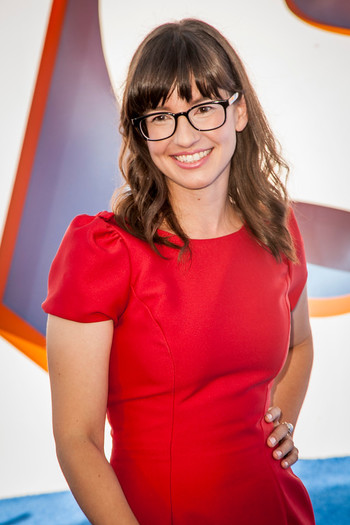 Katie Crown first made herself known with her work doing voices for Canadian animated series, most notably as the wild and hyperactive Izzy from Fresh TV's hit Total Drama series. While she also found herself in major gigs for other Toronto-produced cartoons like Nelvana's Spliced (as the level-headed platypus Patricianote she also provided the meowing of antagonist Mister Smarty Smarts' feline-cephalopod henchmutant Octocat) and Fresh TV's third animated show Stōked (as tomboy surfer Finn McCloud) during the 2000s, Izzy ultimately proved to be her Star-Making Role, as she gained a great deal of praise for her fast-paced, heavily ad-libbed vocal performances as the character from Total Drama's fanbase and its other voice actors.

Because of the attention she got for her performances as Izzy on Total Drama, Katie Crown became one of the few Toronto-based voice actors to break out of the Only So Many Canadian Actors niche, much like Tara Strong and Cree Summer before her. From the 2010s onward, just like the aforementioned names, Katie Crown is a staple of voice acting for American cartoons, with her first major roles being Cartoon Network's Clarence as the title character's mother Mary Wendell and his long-suffering teacher Ms. Baker, as well as the quirky and energetic Tulip on Warner Bros. Animation's 2016 movie Storks. Since then she has also made notable appearances in such shows as Disney Television Animation's Amphibia (as Ivy Sundew, love interest of deuteragonist Sprig) and Dreamworks Animation's Cleopatra in Space (as the piscine alien Akila).

Katie Crown has also broken into screenwriting, doing such work for series like Bob's Burgers (serving as the show's head script editor since Season 10), Star vs. the Forces of Evil, and Sanjay and Craig. She even made her own cartoon pilot for Nickelodeon in 2014 called Francine (even voicing the title character)! And even despite her involvement in American cartoons, she still returns to her roots in Canada to reprise Izzy, the character that launched her career, for the character's appearances in later installments of the Total Drama franchise.