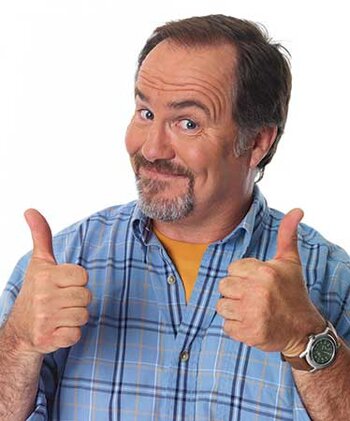 A veteran of the world-famous Second City comedy troupe, Neil Crone has appeared in countless movies, TV shows, cartoons, and commercials. He is probably best known however for portraying Fred Tupper in Little Mosque on the Prairie and Jerry Whitehall in Cube 2: Hypercube, but is also recognized for appearances in such works as New York Minute. Hollywoodland, It (2017), American Psycho 2: All American Girl, Murdoch Mysteries, Endlings, and The Red Green Show.

He's also remembered by many for his voice acting roles, including Bud Topper in Noddy's Toyland Adventures, Big Frank in Timothy Goes to School, Perky of Erky Perky, Dwayne in Total Drama Presents: The Ridonculous Race, and Gordon and Diesel 10 in Thomas and the Magic Railroad (he would also later reprise the former role in Thomas & Friends: All Engines Go, being the only actor in that film to reprise a role in a later franchise entry).

Outside of acting, Neil Crone is also an award-winning newspaper columnist and children's author. He wrote a syndicated column for Metroland Newspapers until 2020, even publishing his writings in 2 separate book compilations. He also writes regular articles for the Durham, Ontario's This Week newspaper.