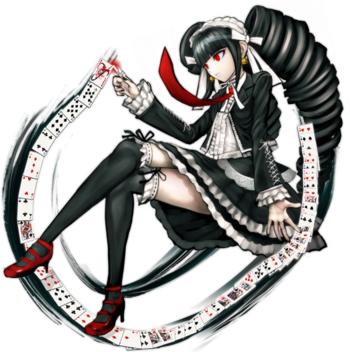 Also known as the "Queen of Liars," Celeste is renowned for her exemplary luck in games of chance. She's accumulated a sizable fortune by robbing blind anyone stupid enough to challenge her. She speaks softly and smiles often, but in a way that tends to creep out everyone around her. She also hides a surprisingly short temper and will start shouting (usually at Hifumi) if she isn't pleased. She is the culprit of Chapter 3, tricking Hifumi into killing Kiyotaka before killing him herself and trying to frame Yasuhiro for it. She is exposed during the trial and executed by Monokuma, subjected to a faux "witch burning" that gets interrupted when Monokuma rams a fire truck into her.