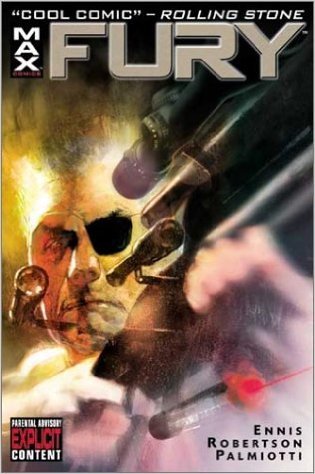 He beheaded Hydra, kicked commie tail, and took A.I.M.!
Fury, a 6-issue miniseries created beween 2001 and 2002, is the first Nick Fury story under the Darker and Edgier, Bloodier and Gorier Marvel MAX line, written by Garth Ennis and illustrated by Darrick Robertson. The story concerns an older Nick Fury, facing the now-Obstructive Bureaucracy of S.H.I.E.L.D., as he tries to stop Rudi Gagarin, an old rival.
Advertisement:

Has a Stealth Prequel in Fury: Peacemaker, which also links it to the later Fury: My War Gone By. The same iteration of Fury also appears in The Punisher MAX.

Not to be confused with Mad Max: Fury Road.