Series / Scent of a Woman 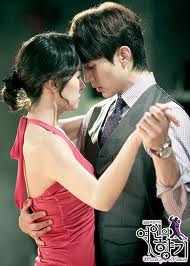 It's not bad falling in love to a tango!
Advertisement:

Scent of a Woman is a Korean Series centered on Lee Yeon Jae, a low-level employee at a travel agency who is told she has six months to live. Her love interests include Dr Chae Eun Suk, an oncologist who was her first love 20 years before, and Kang Ji Wook, a bored corporate son who is put in charge of her division. Add to the mix Lim Se Jyung, the spoiled, rich daughter who is engaged to Ji Wook as a corporate merger between their fathers' companies.

When Yeon Jae finds out about the terminal cancer, she decides to create a bucket list of twenty things she wanted to accomplish before she dies. She quits her job, determine to fulfill as many as possible. Some are easy ("Make my mom smile every day."); some are a little less so ("Go on a date with JunSu

"). In the course of this, she meets up with Ji Wook in Okinawa. He is first attracted to her free spirit as a stark contrast to his own shuttered heart, but eventually they learn to take care of each other.

Were you looking for the 1992 Al Pacino movie? Go here.