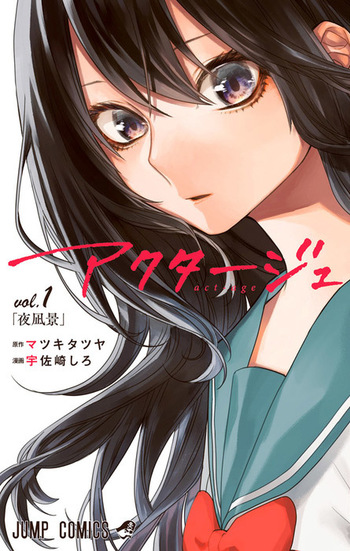 Sumiji: What do you think "acting" is, exactly?
Kei: Reminiscing?
Advertisement:

act-agenote pronounced in French like "garage" is a manga written by Tatsuya Matsuki and drawn by Shiro Usazaki, published in Weekly Shonen Jump — despite what the cover and premise might make you think — from 2018 to 2020.

It follows Kei Yonagi, a high school girl who's all alone to raise her twin siblings, Rui and Rei, ever since their mother died and their father left home. To top it, she's also just been fired from her part-time job. But that doesn't stop her from trying to get by by using her greatest talent: acting. Problem is, her very immersive approach to acting, based on her own intimate memories, leads her to often get Lost in Character and blur the line between fiction and reality, which scares the producer during her first audition.

However, that doesn't scare Sumiji Kuroyama, an eccentric film director who sees her potential and is determined to polish this diamond in the rough. This is the start of a bumpy but fruitful collaboration, where Kei will dive more deeply into the world of acting.

The series has a pilot/prequel titled Asagaya Geijutsu Koukou Eizouka e Youkoso, published in Jump the previous year, about the meeting between Sumiji and his assistant Yuki. An official fanbook confirmed that it is canon to the series.

For an older (albeit still running) series about the world of acting, compare Skip Beat!; and for a much older series (also still running), Glass Mask. Also compare Smile Down the Runway, another unconventional work published in Shōnen Magazine centered on the world of fashion and modeling.

In early August 2020, Matsuki was arrested for groping two middle school-aged girls. Usazaki and Shueisha then decided to end the serialization with the manga's 123rd chapter (and the official English translation leaves out the last), and later new printings and digital sales were suspended worldwide. A stageplay adaptation that was in the works was also subsequently cancelled. Usazaki has since removed all mentions of the series from her social media.