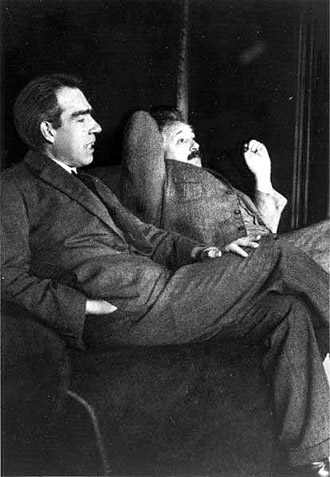 and Albert Einstein, hard at work.
"Progress doesn't come from early risers — progress is made by lazy men looking for easier ways to do things."
— Robert A. Heinlein
Advertisement:

Related to the Genius Ditz or the Crouching Moron, Hidden Badass, you have the Brilliant, But Lazy character, who is more than capable of taking care of any situation that the heroes have to deal with, but doesn't care. They'd rather relax and do nothing to help. This character will likely Refuse The Call when it comes, feeling that, whatever's going on, it's not their problem. Expect them to be very sarcastic as well.

Expect such a character to be indifferent, uncaring, and, at worst, obnoxious or self-centered.

However, when it's crunch time, and the heroes need someone to come save them, guess who decides to give them a break?

Often a form of Obfuscating Stupidity. Can be associated with Book Dumb. If they're also rich, they may be an Upper-Class Twit. When they try to be The Slacker, they usually turn into a Professional Slacker. See also Unskilled, but Strong, which a Brilliant But Lazy character can be if they have great power but don't bother working to improve on it.

An obvious subversion here is the notable difference between someone who actually is Brilliant But Lazy and someone who thinks they're Brilliant But Lazy but is actually just Lazy. This also applies to those who are secretly afraid they're not brilliant and hence refuse to exert themselves for fear they'll be exposed. They should also beware of falling into the trap of Laborious Laziness if they find that their smarts and their desire to avoid doing work are, in fact, making them work harder at being lazy than they would be working if they just did what they were supposed to.

May overlap with the Erudite Stoner, whose laziness comes from being under the influence, the Absent-Minded Professor, who may seem lazy because his intellect distracts him from everyday tasks, Jerk with a Heart of Gold, and Deliberate Under-Performance. Contrast Dumb, but Diligent, Nerds Love Tough Schoolwork, and High Hopes, Zero Talent (one who doesn't slack but never really gets there). See also, Hidden Depths. Not to be confused with Genius Slob.

It's also a deconstruction in that Jaime's laziness leads to him having few real accomplishments. Moreover, in the book describing the achievements of each member of the Kingsguard, his page is ridiculously small and the only notability compared to other members is his killing of Aerys... so as a swordsman he's practically a Living Legend, but as a member of the Kingsguard he is a Butt-Monkey. However, come Season 6 and he is growing out of it. Jaime confronts the High Sparrow, immediately tries to approach the small council to do something about the situation in Dorne and then when it's clear that unity is needed to take on the Faith Militant he not only convinces Kevan and Olenna to work with Cersei again, but it's clear from Olenna's face that she's thinking "This boy knows his shit".