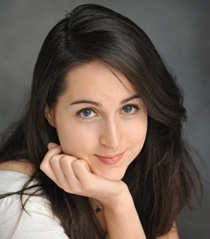 Genevieve Simmons (born June 24, 1991 in Harris County, Texas) is one of the newer voice actresses on the block, particularly in Houston-based dubbing for Sentai Filmworks. She is also the sister of fellow voice actress Juliet Simmons, and they tend to be cast in a lot of the same anime titles together.

In 2015, she relocated to New York City and spends her time between there and Houston.