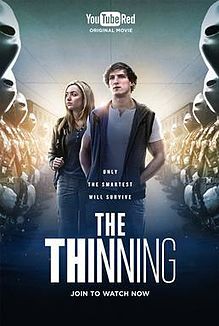 All scores are final.
Advertisement:

The Thinning is a 2016 film distributed by YouTube Red. It is set in a dystopian future in which a worldwide shortage of natural resources has led the UN to order all countries to reduce their population by 5% each year, and America has chosen to comply with this directive by administering a high-stakes test every year from 1st grade to 12th. The lowest percentile in each grade is then executed in the titular "Thinning."

We follow two students, Laina and Blake, through their last two years with the Thinning: Laina is making and selling "study guides" — contact lenses with embedded computers that provide test answers — in order to pay for her mother's treatments. (For what is never specified, but it's implied to be cancer.) Blake is the governor's son. He attempts to procure one of Laina's study guides, but she has none left. Blake's girlfriend Ellie fails the test and is killed. Blake tries to get his father to spare Ellie, but the governor tells him the law applies to everyone.

A year later, Laina's mother has died, leaving her to look after her two younger siblings. Her sister, Corrine, is in first grade this year, meaning she will be taking her first test. Laina escorts Corrine to her test before going to her own. Blake records a video of himself stating his intent to deliberately fail the test and force his father to change things, and drops it in the mail. One of his father's employees spots him doing this and retrieves the video, bringing it to his father to watch. His father contacts the administrator of the test to arrange for Blake to pass regardless. Laina fails despite being one of the best students in school who knows she couldn't have failed the test. When Blake cuts the power to the room where the Thinning takes place, Laina manages to escape, and together the two join forces to get to the bottom of things.

A sequel, The Thinning: New World Order, continues after the events of the first film, featuring a resistance group attempting to end the Thinning.