Film / We Are Marshall 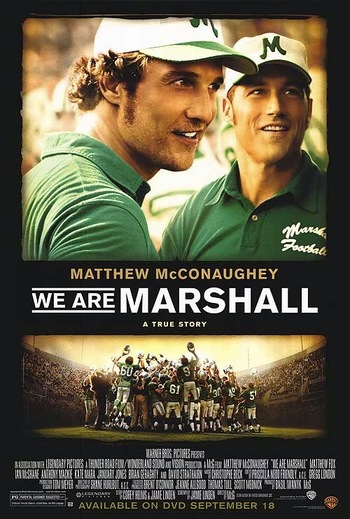 "One day, not today, not tomorrow, not this season, probably not next season either but one day, you and I are gonna wake up and suddenly we're gonna be like every other team in every other sport where winning is everything and nothing else matters. And when that day comes, well that's... that's when we'll honor them."
— Coach Jack Lengyel
Advertisement:

We Are Marshall is a 2006 film which tells the true story of the 1971 Marshall University football team's attempt to rebuild following a plane crash which kills most of the 1970 team and coaching staff returning from a game against East Carolina University. Most of the action involves the season after the crash, using surviving members of the team, players drawn from other sports, and freshmen (who were not normally allowed to play at the time).note The NCAA then did not allow freshmen to play on varsity teams in football and men's basketball; Marshall was given a waiver due to the exceptional circumstances. That rule was abolished in 1972, and freshmen have played ever since. The film ends with the "Young Thundering Herd"s victory against Xavier University.