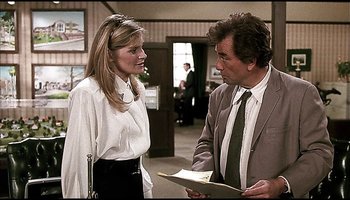 "Rest in Peace, Mrs. Columbo" is the fourth episode of the ninth season of Columbo.

The episode opens with a shocking scene—the funeral of Mrs. Columbo! As a grief-stricken Lt. Columbo stares dumbly at his wife's coffin, a woman among the mourners stares at him, her face full of rage, exulting in how she killed Mrs. Columbo and she'll kill him too. Cue flashback...

The murderous lady at the funeral is revealed to be one Vivian Dmitri (Helen Shaver). Vivian is a real estate agent who specializes in selling enormous mansions to the nouveau riche. After selling a house to a couple of suckers for six million dollars, Vivian makes a date with Leland St. John (Ian McShane), a married businessman that she has a Friends with Benefits relationship with. She then goes back to the office to meet her boss at the real estate agency, Charlie Chambers (Edward Winter).

After having a drink to celebrate the deal, Vivian pulls a gun. It seems that a decade ago her husband Peter worked for Charlie, and was Stealing from the Till. Charlie reported him to the police, and Peter panicked and killed the client he was embezzling from. Peter went to prison but died eight years into a ten-year sentence. After reminding Charlie of all this Vivian shoots him to death.

Vivian filches the ATM card from Charlie's pocket and zips off to her date with Leland. She excuses herself from the table to use the ladies' room, but instead makes a quick exit from the restaurant and uses Charlie's card to get $200 from a nearby ATM. Dinner is followed by sex with Leland, providing Vivian with an alibi; after leaving Leland at 2 am she goes back to the office and plants the money and ATM card on Charlie's body.