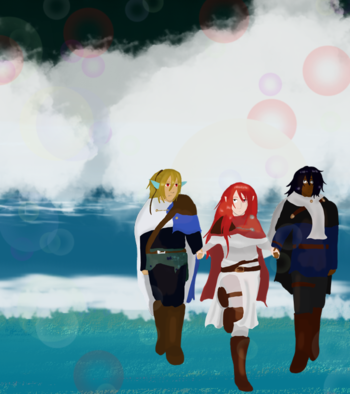 Windfire, Nightshade and Riverrose on the witching plane

Magical Annals Amor And Augurs is book two of the Magical Annals series. It directly follows the events of Literature/Magical Annals Antiquities and Arcana. Thus, some spoilers may happen if you read this page before reading book one.

Windfire and Nightshade are now married and have agreed to help Riverrose claim the bounty on Earthwind and and any other member of the Simon family that can be found. After their near deaths, Windfire, Nightshade and Riverrose seek the advice of Silverwolf on exactly what they should do to gain more power.

Meanwhile, bizarre instances of deja vu begin happening to witches who do not have psychic abilities. Finding this to be a curious development that had never happened before in modern history to witches without psychic abilities, Nightshade's father begins trying to find answers.

Tropes Associated with Amor and Augurs

The Simon family is descended from the ancient ogre. They have medium to tan skin and are almost entirely brunette. Their family members are taller than the other witch families, have horns and fangs. Their eyes have hypnotic powers.