Guinea (French: Guinée), officially the Republic of Guinea (French: République de Guinée) is a country in West Africa, forming a crescent stretching into the interior from the coastal strip, which contains the capital, Conakry. It gets its name from the Gulf of Guinea, which the coast borders with. No, it has nothing to do with guinea pigs, which are neither pigs nor from Guinea.

Famous for being a treasure chest of bauxites and the mountainous Fouta Djallon highlands, which is the source of many of West Africa's longest and important rivers, including the Niger (which defies logic by moving away

◊ from the coast before settling on a southward turn in the middle of a desert), the Senegal, and the Gambia. Also bauxite, which the country has possibly the largest reserve in the world. The country is also primarily inhabited by the nomadic Fula people, making it one of the most nomadic societies in the world. Did we mention that the country has bauxite?

Was ruled by the Ghana Empire until 1200, Mali Empire until 1600, and Wassoulou Empire until the mid-19th century. European explorers arrived in the 15th century, pioneered by the Portuguese, who named the region Guiné, after the darker-skinned Guineus, whom they distinguished from the comparatively lighter-skinned Moors. Later, the French took control of the coast and managed to subjugate the present-day territory of the country in the late 19th century after heavy fighting with the Wassoulou Empire. It was then included within the French West Africa greater colony, with the capital at Dakar, Senegal.

The French organized independence referendums in its colonies in 1957 with the choices of sovereignty or autonomy within the French Community; though others would eventually be granted independence, Guinea made a name for wanting to secure its sovereignty as early as possible. Since then, autocratic governments with a dose of coups have been characterizing the country's politics as of late; the first president Ahmed Sékou Touré, in particular, banned oppositions and adopted socialism as the country's leading ideology, with close ties with the Soviet Union and (later) China to boot. His rule saw a Portuguese infiltration with the ultimate goal of assassinating Touré, in revenge for supporting the PAIGC guerrilla movement advocating independence for Guinea-Bissau and Cape Verde. They achieved most of their goals except for killing Touré's himself, who would rule until his natural death in 1984 of heart attack.

A coup shortly after Touré's death installed Lansana Conté, who became the country's principal dictator for 24 years until his death in 2008. Attempts of further coups by military generals, including Moussa Dadis Camara, were thwarted when the country was threatened with complete anarchy in 2009. A proper presidential election, the country's first, was finally held in 2010, which elected Alpha Condé as president.

In 2014, one of the largest outbreak of epidemic in human history, the West African Ebola virus epidemic, had its head start in Guinea, when a 2-year-old boy named Emile Ouamouno contracted the disease, spread it to his sister, mother, and grandmother, the rest of their village, and eventually the entire country within a span of several months. It then went cross-border to Liberia and Sierra Leone, the former of which took the biggest hit in casualties overall. Though the disease has largely receded, flareups still occasionally occur in Guinea and Liberia.

Most of the country remain undeveloped due to decades of mismanagement, and it also has one of the lowest HDI and the highest income inequality in the world. Thankfully, this has not deterred the country from attempting to improve itself and attract foreign investments. It also gets the luck of not experiencing disastrous civil wars of any kind like its neighbors Guinea-Bissau, Liberia, Sierra Leone, and Ivory Coast, though protests against governmental rule with casualties are not uncommon.

Other than the mountaineer and nomadic Fulas, the people of Guinea consists of the savanna-dwelling Malinkas, the coastal-inhabiting Susus who form the majority of Conakry, and other minor Niger-Congo groups in the southeast. Most of them follow Islam, the religion being brought through contact with the Almoravids in the 12th century, though there are several scattered Christian communities near the border with Liberia and Ivory Coast. 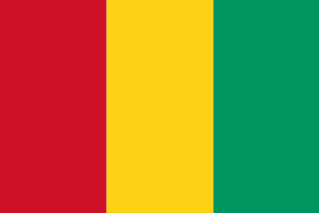 The tricolor, which contains pan-African colors, is modeled after that of Ghana's. The red, yellow, and green components represent the blood of the martyrs for independence, the sun and the riches, and vegetation and agriculture, respectively.