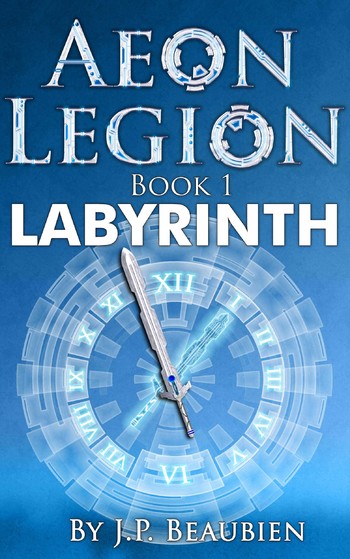 A quiet day of surfing the internet at the local library was interrupted when Nazis kicked in the front door.—Opening line
"I have seen the steel in you."
Advertisement:

"Labyrinth" is the first book in the Aeon Legion series, a Science Fiction Time Travel series by J.P. Beaubien, creator of Terrible Writing Advice. Published on March 2016, the story follows Terra Mason, an ordinary girl about to graduate high school, who discovers a hidden world of time travel after witnessing a battle between the Aeon Legion, an elite force that protects history, and a force of time traveling Nazis led by the charismatic Hanns Speer. During the battle, Hanns's cunning almost allows him to steal a history book, but Terra works up enough courage to stop him from changing history.

Impressed with Terra's bravery, Alya Silverwind, one of the Aeon Legion's greatest heroines, offers Terra an opportunity to attend the Legion's academy. There Terra learns how to use technology that controls time itself, but she has to master it before the academy's final test; a deadly series of trials called the Labyrinth. Unfortunately, she has to compete with some of history's greatest soldiers and warriors in order to earn her place in the Legion.

While Terra struggles to survive the Legion's training, Hanns prepares to enact a plan that could not only secure the Third Reich’s place in history, but finally challenge the Aeon Legion's control of time. However, Hanns remains unaware of the Nazi Party's many atrocities. Both Terra and Hanns are equally determined to prove themselves a hero.

The story takes place in The Edge of Time, a place where all time overlaps. There are many branching lines of energy called continua that each contain an Alternate History. Most of the action takes place in a powerful city state floating in the Edge of Time called Saturn City. The Aeon Legion acts as Saturn City's defense force and they police all time travel within the Edge of Time. The Edge of Time is periodically beset by various threats that only the Aeon Legion has any chance of stopping. These threats range from the familiar such as Nazis, to the bizarre like the hyper evolving Manticores.

The story is a soft science fiction. There are no paradoxes and the physics of time travel are glossed over. The story has a heavy emphasis on action scenes and reads more like a fantasy story than science fiction.