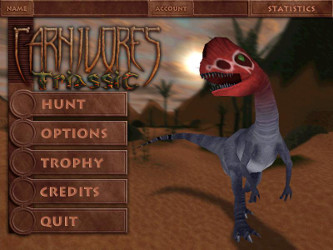 Good old Liliensternus here is just one of the many wonderful and exotic critters waiting to pick your bones clean.

A freeware, stand-alone mod for the 1998 Carnivores series created by Dory Holtzman (creator of Poharex), Triassic expands upon the canon established by the original trilogy and adds an entirely new region to the alien planet of FMM UV-32 with its own unique animals and challenges. If you're a fan of the series or just looking for a hunting simulator with a twist, it's well worth your time.