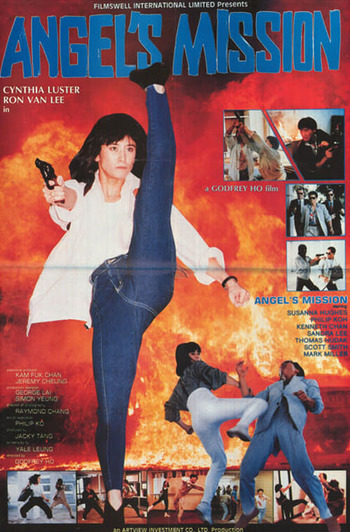 It's a testament to Oshima's commitment to a role when she can perform a split-kick in the middle of a fiery explosion to pose for a photo.
Advertisement:

Oshima plays Cynthia, a Japanese Interpol agent in Hong Kong visiting her mother. When the notorious triad leader Ma moves his operations to Hong Kong as well, Cynthia is quickly assigned to investigate because Ma is responsible for the kidnapping and prostitution of three Japanese women besides various crimes. Cynthia's investigations ends up crossing paths with Jerry (Dick Wei), whose sister Brenda is a victim of the same trafficking ring, Hong Kong top cop Karen who is on the same case as well, and low-time triad enforcer Wong (Philip Ko) who intends to usurp Ma's position as leader of the mob.

Also known as Born to Fight, Kicking Buddha, The Justice of Buddha, Ultimate Lady Fighter, and Fighting Angel - Born to Fight 5. note The last one... yeah, Fighting Angel is the international release title for the Iron Angels trilogy, and followed by Princess Madam which serves as the fourth, before being followed by this movie. Which is odd, considering this movie has an entirely original plot with Oshima who previously played the main villain of the first Iron Angels movie returning in this one, in an unrelated role. See, it's quite straightforward and not that complicated at all.

Tropes included in this film: