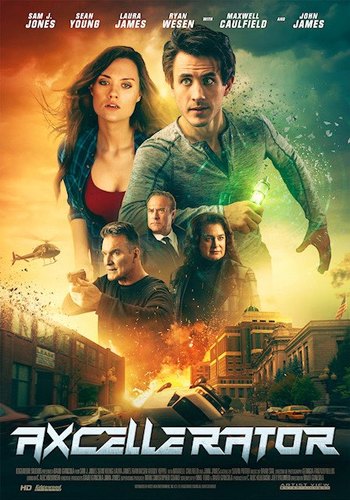 Axcellerator is the tale of a young car thief, Dane, who in the middle of trying to lift a vehicle after his father's funeral gets carjacked himself by a Cloud Cuckoolander Scientist who is on the run from the government. When it seems that Dane is about to die in a shoot-out, the scientist gives Dane a strange device that enables him to instantaneously teleport back to his home in New York.

Dane promptly uses the device to escape his landlord, accidentally kidnapping a retail worker named Kate and dragging her back to New York with him. And then the device breaks. Now Dane is stuck with a teleporter that doesn't work... and now Dane's got a brutal hired mercenary, Brink, played by Sam J. Jones on his trail trying to get it back and leave no witnesses. Meanwhile, government spy Amanda (played by Sean Young) and CIA head Ray Moritz (played by Maxwell Caulfield) are trying to make sure the device goes to them instead, the latter to destroy it, the former for reasons unknown.

David Giancola's latest film to date after a nearly 8 year gap between his usual Direct to Video fare, he finally released it as a video on demand title through Amazon. In addition, the film also wound up in the hands of Rifftrax, who offered it to their fans as a free stream for 48 hours. The film was presented without their trademark jokes but they also asked their fans to respond if they would like to see it added to their existing library of Edgewood Entertainment and David Giancola Alternate DVD Commentary tracks.

"You really ought to go easy on that hard stuff friend, it's a killer."
"You know that man... really can't hold his liquor."
"I'm going to let you go if you can help me with one more thing I need... I want you to look like you've been shot in the head." bang