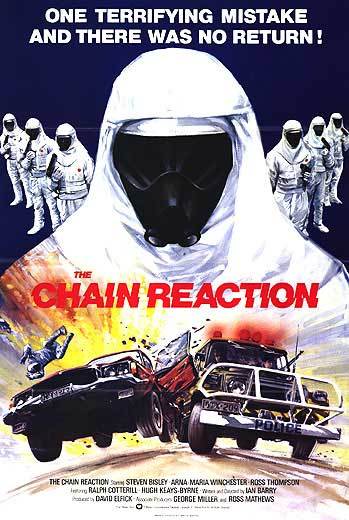 "A fast drive to Paradise turns into a nuclear nightmare!"
— Tagline
Advertisement:

The plot involves a nuclear engineer in rural Australia named Heinrich Schmidt (Ross Thompson) who is badly contaminated in a radiation leak caused by an earthquake. He knows that the leak will potentially poison the groundwater and the soil and attempts to warn the public with the help of married couple Larry and Carmel Stilson (Steve Bisley and Arna-Maria Winchester). However, his boss has other plans...

The film's cast is notably composed largely of veterans from George Miller's post-apocalyptic classic, including a brief cameo from Mel Gibson. Miller himself served as the film's associate producer and helped shoot the climactic car chase sequence.

Not to be confused with the 1996 film Chain Reaction, or the game show of the same name.