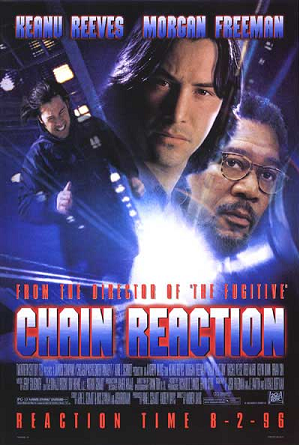 Eddie Kasalivich (Reeves) is a machinist working at a laboratory researching a new hydrogen power source involving a laser beam and sound waves to induce sonoluminescence. When he returns to the lab after the first stable test, he finds his boss murdered and the place about to explode. He and his coworker Dr. Lily Sinclair (Weisz) are framed for the explosion and have to run from the authorities while trying to clear their names.

Not to be confused with the game show that involved a chain of words or with the 1980 Australian film The Chain Reaction.