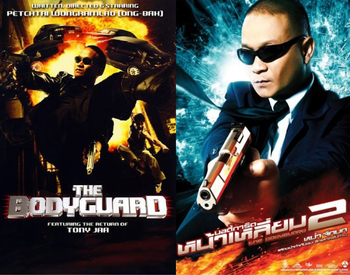 The Bodyguard is a duology of action-comedy film written, directed by, and starring Thai comedian Petchai Wongkomlao (who previously had a minor role in the first two Ong-Bak movies), as well as Tony Jaa appearing in both films... at roughly four minutes each.

Wong Kom (Petchai) is the titular bodyguard and an all-round badass, but also a family man juggling his dual identity from his family. When he's out of a job due to his employer's assasination, Wong Kom had to clear his name while taking on legions and legions of enemy mooks.

The second film had Wong Kom, now inexplicably renamed Khamlao, as the leader of a Black op Counter-Terrorism Unit, going undercover as a country music singer. Realizing that his client's record label business turns out to be the front of a terrorist WMD production plant, Wong Kom must save the day again, but Hilarity Ensues when Wong Kom's suspicious wife Keaw decides to tag along.