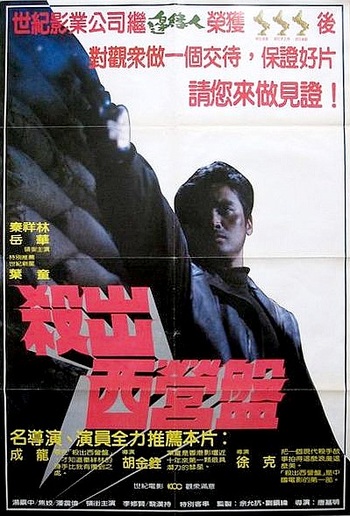 Charlie Chin Is About to Shoot... the bad guy sneaking up behind you!
"Coolie Killer is the kind of movie John Woo would spend the next 10 years trying to make."
— HKMDB Review
Advertisement:

Coolie Killer is a 1982 Hong Kong action movie with elements distinctively similar to the kind of movies John Woo would make, but it debuts way before Woo's quintessential entry into the genre, A Better Tomorrow, and is often cited as the real progenitor of heroic bloodshed cinema, kicking off a film-making trend that is still relevant in the action genre today.

Ko Tat-fu (Charlie Chin) is a former coolie dock worker, who turns to the life of a hitman when times are tough, but after quitting the assassin business he have since established a shipping company based in Hong Kong's Sai Ying Pun district. But when a triad syndicate attempts a hostile takeover, killing four of his workers and threatening his business, Tat-fu have to pick up his guns again, while crossing paths with Hong Kong policeman Inspector Chung (Yueh Hua) also investigating the mob.

This is the closest Hong Kong would get to a John Woo-style movie, arguably starting the Hong Kong Blood Opera sub-genre of action films, before A Better Tomorrow officially kickstarts the concept and gets the ball rolling.

Danny Lee co-stars as Tat-fu's mob superior, although why didn't he portray a member of the police investigating the mob (given Lee's passion in playing policemen) is still an unanswered question.