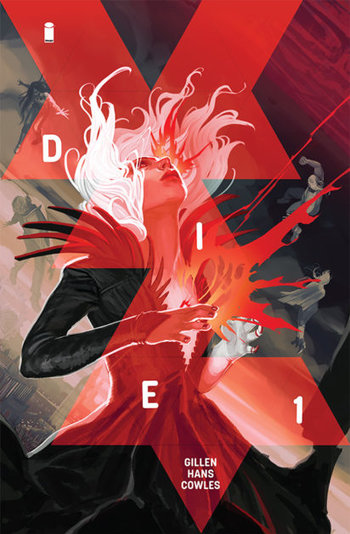 "I made this just for us. This is fantasy for grown-ups. Let’s play."
— Sol
Advertisement:

DIE is a comic series written by Kieron Gillen, illustrated by Stephanie Hans and lettered by Clayton Cowles.

In 1991, six teenagers sit down to play a tabletop RPG. They vanish. Two years later five of them reappear fifty miles away. One is missing an arm. They can’t seem to talk about what happened to them.

They try to resume their normal lives. They get jobs, get married and have kids of their own. And then, in 2018, the thing that happened to them comes back into their lives.

A role-playing game that is also

called DIE which has players create personas, who then create characters they inhabit within the world of DIE (a game within a game). A free beta was released when the first arc of the comic concluded; a final version is being published in partnership with games company Rowan, Rook and Decard.