This is the character sheet for Final Fantasy I.

Warrior's a great tank who can learn some White Magic later. He can equip the best equipment in the game, and is a good addition if you want a team which is safely generic.

Warrior represents the original Final Fantasy in the Dissidia series and other Spin-Off titles, including Theatrhythm Final Fantasy and Final Fantasy Brigade. In the official novelization of the game, the leader of the team is a male Warrior. His Canon Name is Setro (Zest in the Japanese version), and he carries the Fire Crystal.

Thief has decent attack power and a higher chance of fleeing from battles. As a Ninja, they can learn some Black Magic spells, such as Temper to boost your fighters' damage. They may seem inferior to the Knight at first, but they bring some interesting tools to the table.

In the official novelization of the game, one of the Warriors of Light is a cynical Thief named Zauver (Sauber in the Japanese version) who carries the Wind Crystal.

Monk is low-maintenance because he doesn't need to buy equipment. He does insane amounts of damage compared to anyone else on your team. He is one of the most reliable characters for killing bosses.

Red Mage has access to both White Magic and Black Magic. They have decent equipment options for a spellcaster, and they learn enough of the Black Mage's spells to make the Black Mage themselves look redundant.

White Mage has access to all of the best healing spells. They may lack strength in the beginning, but they compensate for it by making the game much easier. Once you unlock Holy and the Sage's Staff, they become a competent attacker.

In the official novelization of the game she is a motherly youth named Flora (Floe in the Japanese version) who carries the Water Crystal.

Black Mage has the highest Magic ability, which makes them the best at casting spells or using magical items during combat. They're pretty fragile throughout the game, but they make a great AoE attacker.

In the official novelization of the game he is a quiet man named Teol (Daewoo in the Japanese version) who carries the Earth Crystal.

A fallen knight of Cornelia, Garland is holding the Princess ransom in exchange for the throne. He forges an unholy alliance with the Four Fiends, entering a Stable Time Loop which renders him practically immortal. He transforms into Chaos, the ultimate evil. (And he will knock you all down.)

"But I will be reborn once more. So even as you die, again and again, I shall return. Born again in this endless cycle I have created!" 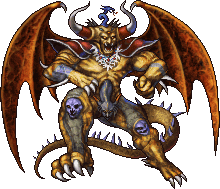 The lord of discord, Chaos is acting leader of the Four Fiends. He is not present for the majority of the game, only appearing in the final dungeon. Incidentally, one of Vincent's Limit Breaks in Final Fantasy VII allows him to turn into Chaos. 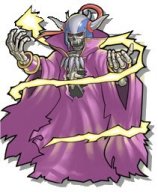 The Earth Fiend is responsible for the rotting blight spreading over the planet.

The Fiend of Fire. She was the last of the Fiends to awaken, originally due to rise 200 years after the Lich. Note that she resembles Kali, the multi-armed Hindu deity; the first documented case of Engrish! 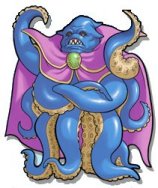 The Fiend of Water. 1,000 years ago, Kraken and Tiamat joined forces and effectively destroyed civilization, establishing themselves at the nerve centers of the societies they brought down. 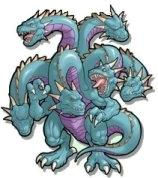 The Fiend of Air, a hydra residing high above the earth. She was the first of the Fiends to awaken, and is the most powerful of the lot.

A brigand who has taken over the port town of Pravoka.

Astos is the dark elf who placed a sleeping spell upon the elf prince of Elfland/Elfheim in a bid to rule over all elves.

He once more in Final Fantasy IV, then retires from the series.

The beautiful eldest Princess of the Kingdom of Cornelia, Garland takes her captive when he goes rogue as a ransom to the kingdom. She appears as a playable character in Theatrhythm Final Fantasy.

The Cardia Islands are home to a race of friendly dragons whose king is Bahamut.

Matoya
Matoya is a blind witch living in a cave north of Corneria. She dispatches the heroes on the first of many fetch quests throughout Final Fantasy. Her only friends are backwards-talking brooms.
Prince of Elfheim
An elf prince who resides in a castle at Elfheim (Elfland) and is put into a deep sleep by the evil Dark Elf Astos.
Dr. Unne

Everyone's heard of Dr. Unne! He's a linguist who will offer to translate Lufenian... if only he had something to base his translation on.

A minor character that first is mentioned as the one who predicted the arrival of the Light Warriors; he later waits for them at Crescent Lake.

A minor character who did not appear in the original Final Fantasy. He is a key player in Dissidia, and is briefly referenced in the Dawn of Douls remake. He is an ancient Lufenian who created the airship used by the Warriors of Light.