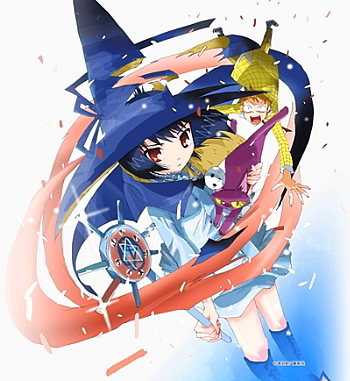 Rurumo and Chiro. Oh, and Kouta as well.
Advertisement:

Kouta Shibaki, an Ordinary High-School Student notorious for his perverted tendencies, found a book in the school library that claimed to contain a ritual that could summon a witch that could grant any wish. However when he finally tried the ritual... nothing visible happened, at least until he got home, where he found the object of his (very stupid) wish: a girl's panty, and with strawberry prints at that.

However on the way to school the next morning he runs into Magi-Mogiruka Rurumo, a slight girl dressed in a stereotypical witch outfit (complete with pointy hat only served to make her seem taller) that claimed to be not only a witch, but the one who granted his wish. There was a big problem, however: in return for the wish, Kouta was going to die in two days.

Oh, and that panty? It was hers, and she needed it back.

One thing led to another, and Kouta somehow managed to escape with his life. However soon after, Rurumo reappears, apparently demoted to witch-in-training, and what's more, she's stuck in the human world until she finishes her retraining... Which of course involves Kouta again.

Done by Wataru Watanabe, known for his work on Yowamushi Pedal, Magimoji Rurumo (まじもじるるも) was serialized from 2007 to 2011 in Monthly Shounen Sirius. A sequel Makai-hen followed soon after, from 2011 to 2013, while a third series Houkago no Maho Chugakusei started serialization on June 2013. An anime adaptation by JC Staff of the first part started airing during the Summer 2014 Anime season.