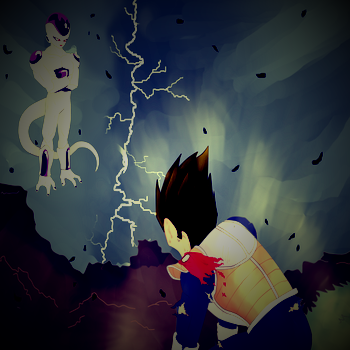 "Vegeta's head jerked again. This time, a flash of golden-yellow light rippled through his hair and vanished as his head dropped again. The sudden flash seemed to encapsulate that moment, freezing it in time."
"I am Vegeta, Prince of all Saiyans! I am the legend, the Super Saiyan terror of your nightmares! I am death, brought to life!"
— Vegeta
Advertisement:

is a Dragon Ball fanfiction co-written by npberryhill and davidstarlingm.

Starting in the the Frieza arc during the climatic battle with Frieza, shortly before Vegeta's imminent death, the Saiyan Prince unlocks the legendary Super Saiyan form, an event that carries tremendous effects on the course of history.

From there, the story chronicles the adventures of Vegeta, having become the first Super Saiyan of his era.

Tropes appearing in Bringer of Death: