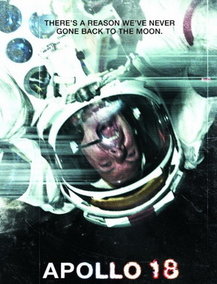 "There's a reason we've never gone back to the moon."
Advertisement:

Apollo 18 is a 2011 American-Canadian found footage science fiction horror film directed by Gonzalo López-Gallego. It's basically The Blair Witch Project, on the moon, featuring astronauts (Warren Christie, Ryan Robbins, and Lloyd Owen) of the fictional 18th Apollo mission during the Cold War. The story follows the last, top-secret Apollo mission to plant advanced listening devices on the moon, so as to detect missile launchers... but something else is discovered instead...

As mentioned, the story is told in the style of found-footage movies like The Blair Witch Project and Cloverfield. Not to be confused with the 1992 They Might Be Giants album of the same name. Also not a sequel to Apollo 13 (though it would be pretty awesome if that were the case).