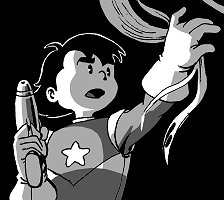 Space Kid
Space Kid (and his teammates Stella, Doc, and Pizmo the robot) fight evil, defend justice, and do good in the solar system of the 26th century. Old-school retro sci-fi!