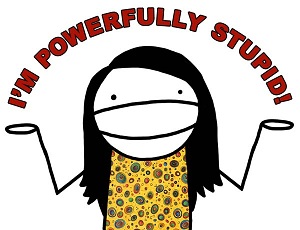 is a Stick-Figure Comic by Natalie Dee. Originally appearing in late 2002, it became a gag-a-week comic in 2003 and then gag-a-day in 2005. It is generally plotless, and tends to rely on more everyday humour and numerous references to her personal life. There's also a fair amount of poop and satire and nonsensicality, the last being a little more common.

Characters tend to remain nameless, though there are some that reappear: Natalie, her two dogs Charles and Chester, and a man who is presumably her husband.

The style is simple, bold-lined characters with round pale faces and stick-thin appendages. Colors tend to be textured, while backgrounds are rarely used. Despite this relative simplicity, a surprising amount of detail put into the work.

Due to the large amount of comics, late-comers will be subject to a long (though amusing) Archive Binge.