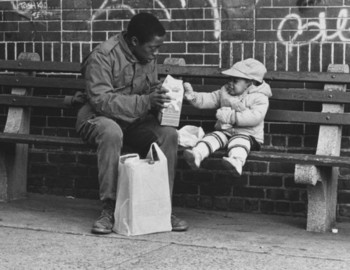 Sidewalk Stories is a 1989 independent film written, directed by, and starring Charles Lane.

It is a black-and-white silent movie, set amongst the poverty and homelessness of Greenwich Village. Lane plays a sidewalk artist barely avoiding starvation by drawing pictures of passers-by, including an attractive young woman (Sandye Wilson) who is drawn to him. He lives in the basement of an abandoned, condemned church. One night the artist's life is disrupted when he sees a man murdered in an alley. The robbers run away, leaving behind the man's toddler child, still in her stroller. The artist somewhat reluctantly takes responsiblity for the abandoned girl, and they bond.

If any of this sounds familiar, it's because this film is basically a remake of Charlie Chaplin's silent classic The Kid. Compare The Artist, a 2011 silent film with a similar Retreaux style.