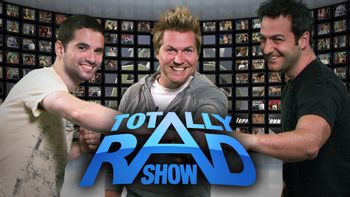 Three rad dudes, with nothing better to do,
get abducted by the crew of the starship Alpha-2.
They're from the planet Q which, due to a space time loop,
is stuck in '82 and must be rescued.
They need our heroes to discuss the latest news
and give their reviews of games and movies too.
Sure hope you're not confused. We swear this is all true.
Not just the premise to The Totally Rad Show.
—The Totally Rad Show Theme Original Version

On November 19th, 2012, the guys announced that they would be ending the program after six years of radness.