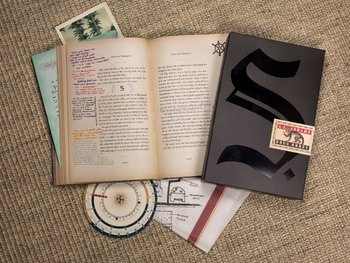 S. is a novel told via marginal notes in another novel, by J. J. Abrams and Doug Dorst.

The core book consists of a fictional novel, Ship of Theseus, written by a fictitious author, V. M. Straka, whose exact identity is unknown. It tells the story of an amnesiac traveler named "S", who tries to figure out who he is. In his travels he finds himself aboard a mysterious ship and then being involved in a conspiracy.

The novel is accompanied by footnotes from an equally mysterious editor and translator, F. X. Caldeira, who, curiously, has never met Straka face-to-face.

Additionally, the book's margins are filled with handwritten notes by two readers: Eric (a graduate student and a long-time Straka scholar who got kicked out of the university) and Jen (a senior student working in the university's library). The two start passing the book between each other. At first, they discuss the novel and try to discover the real identity of Straka and Caldeira. Eventually their relationship deepens and soon they become involved in their own conspiracy related to Straka's identity.

Lastly, there are physical inserts in the form of letters, postcards, maps, and newspaper clippings, left by Eric and Jen.