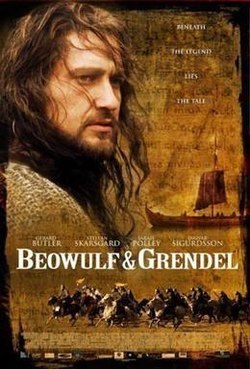 Unferth: It don't brag of wrestling with it. Nor of being able to kill it. The troll broke down these doors with 20 danish warriors sleeping inside. What gives 13 geats better hope?
Beowulf: We won't be sleeping.
Advertisement:

Beowulf and Grendel is a 2005 Icelandic-Canadian Viking film directed by Sturla Gunnarsson that retells the story of Beowulf in a somewhat revisionist manner. Despite this, the film is one of the more faithful film adaptations and attempts to be somewhat accurate in costuming to the 6th century.

In the film, Grendel (Ingvar Sigurdsson) is on a campaign of vengence against King Hrothgar (Stellan Skarsgård) who killed his father. Word gets to the geatish warrior Beowulf (Gerard Butler) who decides to come to the aid to the Danes. A case of a notoriously Troubled Production which was documented in the hilarious documentary Wrath Of Gods.

Beowulf and Grendel provides examples of the following tropes: