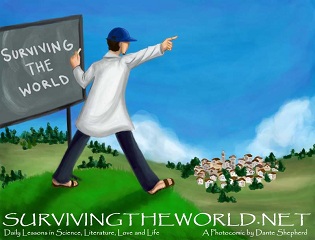 was a daily, gag-a-day Photo Comic by Dante Shepherd (the creative pseudonym of Dr. Lucas Landherr), covering topics ranging from all over the map including life, romance, politics, science, etc. The comic is structured as a college class, and had the working title of 101. Each comic (termed a 'lesson') takes the form of Dante standing in front of a blackboard, with the day's lesson written upon it. The lessons cover a wide range of topics, from social issues to practical advice to literary references (notably to Lewis Carroll).

Dante also occasionally hosted live streams of the making of the comic, and for a while included a monthly crossword by Justin Smith.

A book featuring 300 of the best comics was funded on Kickstarter during the final month of uploads, and is due to be released to backers in December 2018.