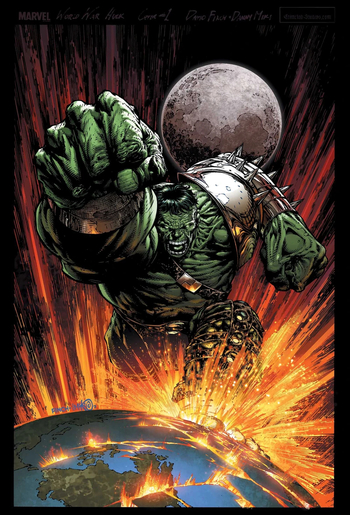 He's Back!, and guess what? You're all screwed.
"Puny humans. I've come to smash."
Advertisement:

World War Hulk is a 2007 Marvel Crisis Crossover; it occurs after the events of Planet Hulk and takes place between Civil War and Secret Invasion.

Before the Civil War, the Illuminati—a group consisting of Iron Man, Mr. Fantastic, Doctor Strange, Prince Namor the Sub-Mariner, Professor Xavier and Black Bolt—decided that The Hulk was a threat to the world because of his unstable and dangerous mood swings. Instead of killing him, they shot the green giant into space and towards a planet without intelligent life, hoping that he would find peace. But due to a malfunction in the spaceship, The Hulk landed on Sakaar, a harsh world where he was captured, enslaved, and turned into a gladiator. Thus began Planet Hulk, where Hulk fought for a living and eventually found friends and true love. He eventually toppled the local tyrannical ruler, effectively becoming the new king, and lived Happily Ever After with his allies and his new wife...

...until the ship that brought him to Sakaar blew up. The resulting explosion shattered the planet and killed many people, including Hulk's wife and unborn child. But The Hulk lived—which made him exceptionally angry. The green behemoth gathered his remaining friends and allies into a war party, then returned to Earth with the intent of making the Illuminati pay for what they did to him. At this time, Hulk was in a new form (referred to as the Green Scar) that allowed him to retain his intellect; this form's rage, at levels Hulk had never reached before, was dispassionate and icy cold. Earth's heroes were disorganized and estranged by the Civil War, which left them unable to meet Hulk's invasion in full force. They had also suffered an enormous loss of popular support, which only grew after Hulk revealed what the Illuminati had done to him.

In short: Everyone was screwed when The Hulk got back.

Hulk turned the Earth's heroes—especially the Illuminati—into gladiators so they could feel the struggles and suffering he went through on Sakaar. He spared only Namor, who voted against sending Hulk into space, and Professor X, who wasn't present. (After seeing the result of House of M, Hulk decided that Xavier had suffered enough.) He set the Illuminati against a monster, then forced them to take up weapons and try to kill each other. The moment is eventually interrupted by Sentry, who had overcome his Split Personality problem just in time to bring the battle to Hulk. The two fought each other into exhaustion, but it was enough to shake Hulk out of his rage and remember his humanity and their friendship—just in time for one of Hulk's allies to kill Rick Jones in front of Hulk. That same ally had also caused the destruction of Sakaar in the first place. Hulk became enraged and slew him, then turned his attention back to his original "foes". The day was "saved" when Iron Man activated a satellite beam that subdued Hulk and turned him back into Bruce Banner. (Jones soon came Back from the Dead once again.)

Bruce Banner was imprisoned until he could control The Hulk; he was later released when the mysterious Red Hulk appeared. Meanwhile, on the planet of Sakaar, a survivor makes his presence known—for he is The Hulk's son, Skaar. But that is another story...

In the aftermath of World War Hulk, the title was turned into The Incredible Hercules.

A sequel was announced on December 1st, 2017, called "World War Hulk II: Smashback", which sees the Totally Awesome Hulk returning to Earth after being dragged to Sakaar and having the Hulk persona finally regain control after having Amadeus Cho keep him back for so long, prompting Carol Danvers and Alpha Flight, Black Panther and the Champions to try to stop him.